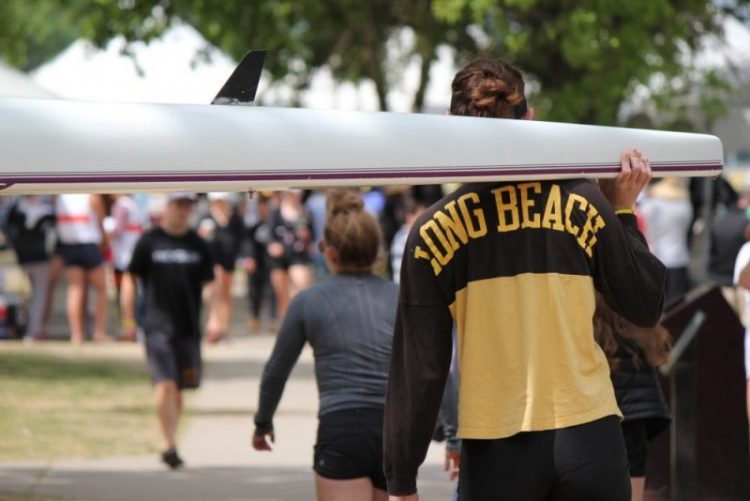 Held every year around the same time, this year’s Western Intercollegiate Rowing Championships, also simply known as WIRA, took place on the last weekend of April (4/28-4/30) at the Sacramento State Aquatic Center. This regatta featured pairs and doubles in addition to the standard 8+s and 4+s featured in just about every regatta. Being the last major and official regatta for most of the collegiate crews on this side of the country, coaches planned for the crews to peak in their training around this time; thus, it is usually the most competitive out of all of the regattas that Beach Crew partakes in. This year, novice and varsity captains from the Men’s team were chosen to lead second workouts on top of the standard 5:30 AM practice, with most of the athletes ending up getting two workouts a day, multiple days a week. The women’s team went through similar feats to prepare for competition as well, feats that required much self-discipline.

The entire Spring Season had many luckless pitfalls, and this year’s WIRA was no exception. A series of unfortunate events during this year’s WIRA ultimately lead to a few of the Men’s team’s boats being scratched from their respective heats. It was a setback to say the least, one that discouraged many members of the team. For some of the members, it would have been their last regatta of their rowing/college career. Thankfully, both the Men and Women of Beach Crew have access to Sports Psychologists,which we meet with once a week throughout the season. We were fortunate enough to have the Men’s Sports Psychologist come up with the team to Sacramento to come support, and inadvertently end up being there to help cope with the adverse news. For the most part, everyone handled the news fairly well. It also didn’t hurt that the weather for the entire weekend was absolutely perfect for being outdoors. For the boats that went out to race in their heats, it seemed like there was extra zeal during the heats. On top of the hours of training leading up to the regatta, the news of fellow teammates not being able to compete alongside may have provided the extra edge needed for this competitive championship. Needless to say, everyone tried their hardest and the results showed;  three of our boats made it all the way to the Grand Finals on Sunday, with every other boat defeating at least one other boat in their respective heats. To sum up the regatta and the Spring season, the whole weekend was an emotional-roller-coaster filled with low points and high points. Starting from the early morning bus ride all the way to the bus ride back, the experience was just that: an experience. WIRA tends to be the longest and most memorable of regattas, and this year’s WIRA did not fail to reach that quota. For many of our rowers, this regatta was supposed to be, and was in fact, the last competitive regatta of their collegiate career. It is safe to say that everyone who partook enjoyed their time spent up north in Sacramento this year alongside their fellow rowers, the very same teammates that have sacrificed hours and months waking up early to sweat and train together. Also a special thank you to the DeVore family and the Brush family for contributing much-needed nourishment to our young athletes during the competition weekend, as well as to the many unnamed supporters who have contributed various needed supplies.