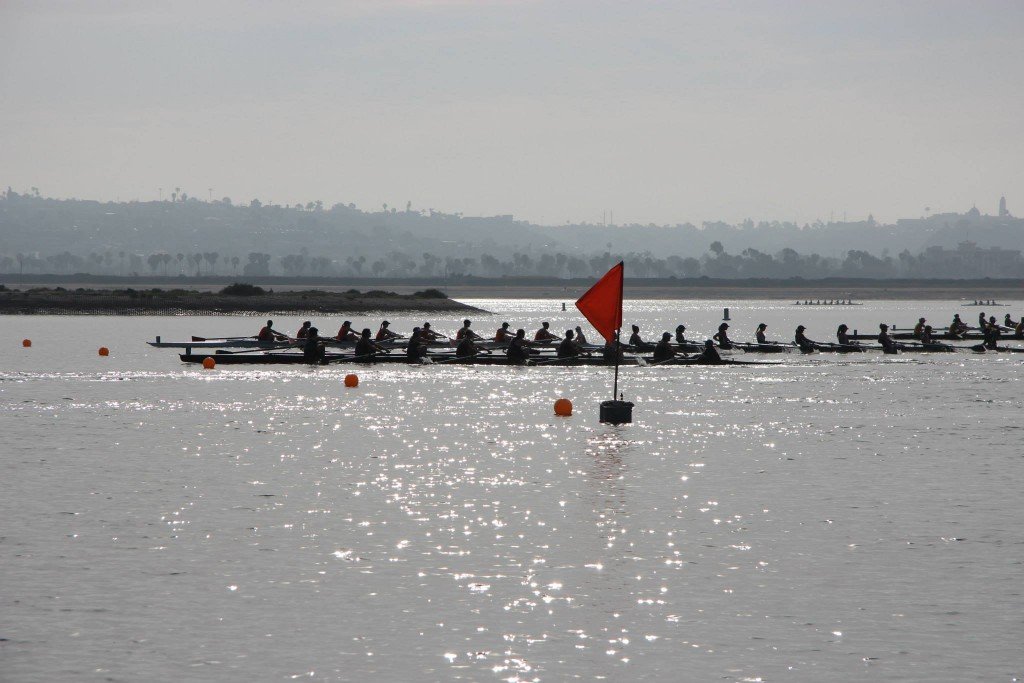 By milliseconds, the Long Beach State varsity and novice women both came in third place in the grand finals at San Diego Crew Classic on March 29.

In fact, the competition was so close that just after the women crossed the finish line, varsity rower Cecilia Guerrero, bow seat, had to announce to the rest of the boat that they had finished before Lewis and Clark College.

During the pre-finals on Saturday, the varsity team finished second in 7 minutes and 19 seconds, 10 seconds after UCSB’s A-boat and 4 seconds before Lewis and Clark College’s A-boat.

“Although the final was a far tougher race, the varsity maintained their composure and responded admirably when challenged by Lewis and Clark in the final run-in to the line,” varsity coach Ian Simpson said. “Despite never really having been in this position in a major final before, this crew was determined to repeat the feeling they had of doing well that they had the previous day and would not let Lewis and Clark, or any crew, get past them.” The women’s novice eight finished third in the grand finals with a time of 7 minutes and 48.9 seconds. Orange Coast College’s B-boat and University of California Berkeley Lightweight’s A-boat finished less than a second after.

Since there was no pre-finals competition for the novice women’s eight, they only raced on Sunday. They finished after OCC’s A-boat and UCD’s A-boat in 7 minutes and 48.9 seconds, .4 seconds before OCC’s B-boat and .9 seconds before University of California Berkeley’s Lightweight A-boat. The men’s novice eight finished fifth in their heat with a time of 7 minutes and 36 seconds, four seconds after Sacramento State University. UC Berkeley, University of Notre Dame and UCI were also part of the competition.

“We can start throwing in some higher rate stuff starting next week and not get winded,” he noted. “[We are] trying to do long workouts, 40-60 minutes at moderate level to keep the [the] heart rate going.”

The women’s varsity and novice team practiced twice a day, which is approximately 20 hours in one week. The varsity team mainly focused on quick catches, while the novice focused on lengthening through the hips.

“At San Diego, I think partially because of the windy conditions, but our drive seemed very up and down,” Smith explained. “[They were] a little bit more vertical with the weight coming up off the seat and then coming down at the finish, which puts a lot of the energy down onto the water as opposed to moving the energy across the water. So, I really wanted to work on that horizontal drive, and part of that comes with when we get the body angle through the hips.”

One of the team goals the varsity team has is medaling at the Western Intercollegiate Rowing Association Championship Regatta. Simpson said he finds it possible for the women to achieve that goal.

“The performance of the varsity and the novices in San Diego opens up all kinds of possibilities for this team,” he added. “We can begin to imagine, and plan for, a time in the near future when the Long Beach State women will be standing on medal podiums holding trophies aloft. I can’t wait!” After finishing top three at San Diego Crew Classic, the novice women are focused on trying to make it into grand finals at the Western Intercollegiate Rowing Association.