All photos by Stefano Balbusso

All teams except the women’s novice eight had to race in a time trial, a 2,000-meter head race, before competing in the finals or petite finals that took place later that day.

The women’s varsity four, which consisted of Lucie Webb, Destanie Brush, Jayne Goodwin, Sydney Abad and coxswain Silbia Ochoa, came in second at finals with a time of 8 minutes and 32 seconds, 20 seconds faster than their performance in the time trial. University of California San Diego (UCSD) finished four seconds before. University of California Santa Barbara’s (UCSB) B and A boat followed.

The varsity eight placed fourth in grand finals with a time of 7 minutes and 29 seconds, six seconds after OCC and UCSD. UCSB finished first at 7 minutes and 15 seconds. Varsity also placed fourth during the time trials, one second before UCSD’s B boat, and UCSB’s B boat. The women’s novice eight finished fourth with a time of 8 minutes and 6.8 seconds, after OCC, UCSD, and UCSB’s A boat. This was their first 2,000-meter race ever.

“It’s kind of hard to know exactly what to expect because they are so new to it in the fall,” novice coach Megan Smith said. “I was very happy with the way they prepared. They also stayed really positive after the race even though they came in fourth. A lot of people could be really disheartened by that, but they were all really excited.”

Smith wants the novice team to build strength and rid their expectations on how much they can achieve, so they can accomplish higher results from themselves and as a team.

“My goal for the team is to teach them to row well and make them feel like they have learned a lot from the beginning to the end because then, I think, they’ll stick with it,” Smith said.

The following Tuesday, Smith had the whole women’s team observe the 2013 World Championships after practice. She wanted to show them how to have direct catches in the water, minimal wasted energy and control during the recovery of a stroke.

“We are going to win by rowing the best, and the best rowers don’t miss any water,” she said. “That is the most efficient – to put your blade in quickly at full compression.”

The men’s varsity eight finished fourth in the petite finals with a time of 6 minutes and 43 seconds, after San Diego State University, University of Southern California (USC) and Loyola Marymount University. Their second heat was nine seconds faster than the time trial.

“We moved the boat better at So Cal than we did at Gruenberg Cup,” varsity rower Patrick Tilley said. “Right now, we’re just really working on trying to get the boat up to speed as fast as we can and then maintaining that…We just got [Brad McCormick] back from being sick, and we are finally having a set lineup that has power and workable technique that will be able to move the boat.” The men’s novice eight A boat finished seventh in their heat with a time of 7 minutes and 19 seconds, 15 seconds behind USC’s A boat. This is a 52 second improvement from their last race at Gruenberg Cup.

“When I met them after their race, before the results came in, I asked them how they felt about it,” novice coach Jonathan Flietstra said. “I told them no matter what the time results were, this was a successful race.”

Flietstra also said he wants to see individual improvement, so he’s been tracking their individual progress and displaying in on graphs.

“As individuals improve, naturally, the team improves,” he added. “I think we learn the most when we are uncomfortable. For example, last week one of the boats was getting very comfortable with rowing on the feather…I even saw some smiles…I immediately changed it up and told them to row on the square. [The goal is] to be uncomfortable…content, but never satisfied.” 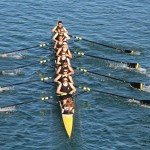 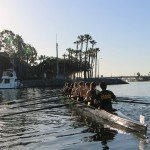 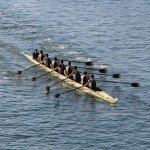 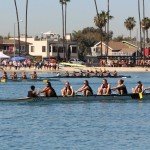 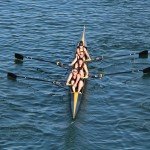