Several members of the Long Beach State Rowing men’s team faced the challenging 2,000-meter sprint more than once at the Gruenberg Cup in the Port of Los Angeles on March 1.

The team competed every race with one boat from two other schools, San Diego State University (SDSU) and University of Southern California (USC)

The varsity eight finished third in their heat with a time of 6 minutes and 59.8 seconds, behind USC, who finished in 6 minutes and 34 seconds. The current was moving against all crews.

“They stayed with the racers,” Head coach Rob Edwards said. “They didn’t lose ground at the body of the race, but they did not advance at all during the race, either.”

Edwards also noted the team is working to improve on its start sequences and getting the boat up to speed in a shorter amount of time. They have been practicing starts and 500-meter sprints all week before the Southern California Opening Day Regatta.

Almost everyone in the lightweight boat had raced in a different heat earlier that day. The boat consisted of five varsity members who were also in the varsity eight: Jake Skoll, Patrick Tilley, Mark Saavedra, Matthew Maliglig and Ryan Woolner and three novices. One novice had just raced in the novice-eight heat.

“He had to hot seat as soon as his boat came back,” Edwards said. “He stayed in the boat and the other seven guys got in. So, I mean that was probably a little tough for him, especially.”

The Gruenberg Cup was the first regatta of the season for the men’s team. It was the novices’ first 2k experience, and it was also a reminder of what competing feels like for varsity. Edwards is certain they will do well, hopefully competing in petite finals at San Diego Crew Classic and finals at Western Intercollegiate Rowing Association. 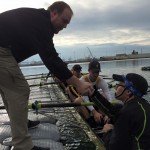 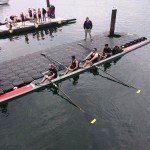 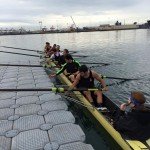