LBS Rowing varsity women finished third out of eight in their heat, improving by 50 seconds since last year.

Saturday races were made up of a series 850-meter sprints for the alumni and novices. They began at the boathouse and finished at the end of Marine Stadium.

Winners of these sprints were not recorded. Although LBS Rowing’s novices have been rowing for a couple months now, they were competing against other teams that had been rowing for either just as long or for only a few weeks. Some of the other schools raced with only six rowers at a time, and others rowed with squared blades.

“The sprints were fun, and I really feel like it was easier to push myself because you are right next to your competition, and you can tell when you are losing,” men’s novice rower Wendel Kuhn said. “What I believe is really important is having that first race down because I know what to expect and know how our entire boat performs under that pressure.”

On Sunday, varsity and novice teams raced a 4,000-meter course around Naples Island.

“NICRC felt like home turf, and especially with our local rivals, we tried our best to see where we place among them,” varsity rower Sydney Abad said.

The women’s team raced one varsity eight and two varsity fours. The varsity eight finished third out of eight behind University of California Santa Barbara’s (UCSB) A-boat and OCC’s A-boat with a time of 16 minutes and 50.28 seconds.

Last year, varsity finished fifth, 1 minute and 22 seconds behind UCSB, who finished last year as well with a similar time, according to women’s head coach Ian Simpson. Since then, the women’s varsity team has improved by 50 seconds.

“The varsity performance would have been good enough for second place in last year’s race,” Simpson said. “However, Orange Coast College also had a very good performance, improving by 40 seconds over last year, good enough to keep them 15 seconds ahead of varsity…However, I have no doubt that our varsity will close the gap and eventually pass OCC in the spring.”

The men’s team competed one varsity eight and two novice eights. Varsity finished fifth out of eight with a time of 14 minutes and 39.74 seconds, finishing 10 seconds before UCLA’s B-boat and also before USC’s B-boat and ASU.

This year’s varsity team had enough for two competitive eights, the team lost four varsity members just after Head of the American.

The varsity team also practices in the evening on their own three times a week, and it has shown in practice, according to Edwards. 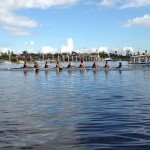 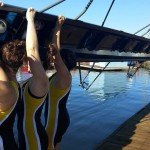 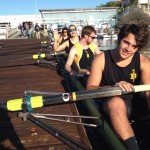 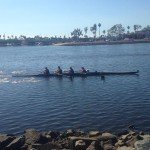 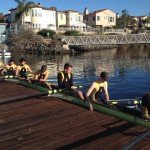 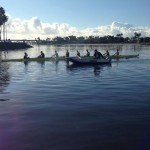