Long Beach State Rowing finished their first regatta of the season at Head of the American (HoA) in Sacramento, Calif. on October 25. The novices, comprised of about 40 members, officially raced 5,000 meters for the first time ever, battling wind and rain throughout.

“With rowing, there’s a lot of responsibility put on the rowers,” women’s novice coach Megan Smith said. “Like, I can’t get out there to the starting line or make sure they’re doing the right warm-up. So, I put a lot of trust on them when they shove off the beach, and I just wave goodbye. I think they did a really good job. The overall goal of having a fun time and getting their feet wet was accomplished.”

This is Smith’s first year of coaching, though training with the development squad for the national team gave her the experience she needed to teach the novice rowers.

“I helped them adjust to national training, and I had to learn how to overcome my own struggles,” she said. “When you’re doing a lot of self-coaching, you have to examine ways to break down the stroke – break down the training – in order to explain it to yourself…But I have also learned a lot in the two months I’ve been doing it.”

The novice B-boat finished seventh with a time of 22 minutes and 55 seconds. They were two seconds ahead of Sacramento’s B-boat and over one minute ahead of University of Saint Mary’s B-boat.

Women’s head coach Ian Simpson describes Smith to be helpful and proactive towards the novices. When asked how he feels working with her, he answered, “It is terrible. She keeps on making suggestions that improves the training experience for the entire team, and she insists on helping the students become better athletes through attention to how they pace themselves, how they train and how they row.”

Men’s novice coach Jonathan Flietstra is now coaching for his second year, and he says he now feels more comfortable as a coach having gone through both seasons the year before.

“Just like my novice rowers, I was truly a ‘novice’ coach last year,” he said. “But just like my rowers from last year came back and are now on varsity, I also feel as if that novice year of coaching is behind me. That is not to say I’m done learning, but there are just some unique things about your novice year, both rowing and coaching.”

The men’s novice eight A-boat tied for sixth place with University of California Berkeley Lightweight Crew with a time of 19 minutes and 49 seconds. They were 16 seconds ahead of Humboldt State, who finished after.

Men’s novice eight B-boat ended in twelfth place out of 14, beating both UC Davis novice A and B boats and only seven seconds behind Sacramento’s novice A-boat.

“I told my guys to go out there and have a set boat over everything else,” Flietstra said. (A set boat is when blades on both starboard and port side are off the water during the recovery, and the boat is balanced.) “For the most part, the boats finished right about where I expected them to finish.”

Since last year, the women’s varsity team has improved significantly. They were the second fastest among the other club teams, finishing two seconds behind University of California Davis and 10 seconds behind Saint Mary’s.

The varsity eight finished in twentieth out of 25 with a time of 20 minutes and 11 seconds. Since HoA 2013, they’ve improved by 65 seconds.

“It is a very different team to last year,” Simpson said. “The returning varsity group of experienced rowers is larger and their collective knowledge and desire is more focused…The a greater focus on goals has the team healthier and in better condition than last year, which means we can train smarter.”

The women’s open four, which consisted of two novice rowers: Emily Seierson and Diana Mejia, two varsity rowers: Jayne Goodwin and Reid Atkins, and novice coxswain Silbia Ochoa, finished as the second-fastest club-boat with a time of 24 minutes and 8 seconds, only behind Chico State, and ahead of Berkeley’s Lightweight Crew, Maritime Rowing Club, Mills College A and B boats and Sonoma State Univeristy.

“There is a great vibe about the team this year,” Simpson added. “The entire group is way ahead of where it was at this time last year. I look forward to continuing the improvement and seeing where it takes us in the rapidly-approaching spring-racing season.” 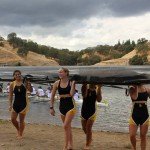 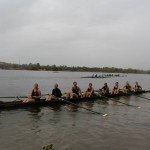 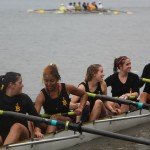 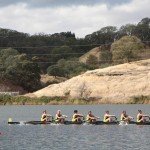 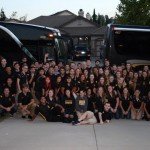 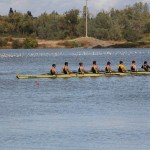 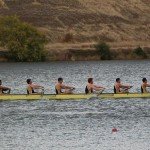 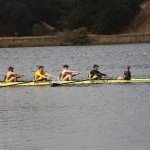 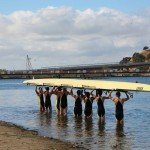