Varsity rower Evan Mauno is now rowing for his second year. He appreciates the motivation it gives him to work harder.

I joined LBS Rowing my junior year, when I transferred to Long Beach State from Palomar College in San Marcos, Calif. I joined the team because of how open they were. There were largely no physical requirements, no selection process, and no test to pass in order to be considered or recruited. If you commit and want to compete for your school, there was a seat and an oar waiting for you. During my first year, I was normally bow seat for the novice lightweight and novice open weight boats.

Physically, rowing is the hardest activity I have ever done. The amount of oxygen, sweat, and energy exerted during practice is astonishing. I am surprised that I even survive some days. In addition, what I see my teammates do at practice inspires me to do better. Rowing is a true demonstration of the human spirit, an exercise in what the mind and body are capable of.

In retrospect, I had the perfect novice year, in that I experienced the peaks and troughs of a race season. I won races, and I lost races. At times, I felt elated and other times I felt frustrated. My novice year made me a more mature, grounded, and all-round better athlete going into my second and final year on the team.

To tell you the truth, it is my teammates that bring me back every morning to the boathouse. The combined emotion, enthusiasm, and levity of the men’s and women’s teams is indescribable. I could not ask for more. We seek each other’s company outside of practice, which only brings us closer.

This next year looks extremely positive. I want us to have the most boats possible and the fastest boats possible. Lastly, training and practices will be more calculated this fall as we prepare for another sprint season in the spring. 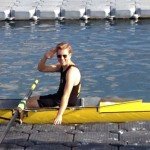 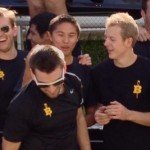