In the Fall racing season of 2009, Beach Crew was hit with an unfortunate problem. Initially addressed in a 2010 report to the Beach Crew Alumni Association and friends, the coaching staff was put in tricky situation. They were unable to do their job efficiently. There’s a problem when your coach can’t keep up with the crew, let alone a referee trying to chase a race. With a run on “coaching launches” at the Long Beach Rowing Association, Beach Crew was faced with a difficult challenge to get a better fleet. With most west-coast manufacturing operations of powered catamarans heading east, the options were limited.

The project was launched in the next year by Brandin Grams, BCA’s Director of Outreach, and Daniel McGill, Coach of the Southern California Scullers Club in Huntington Harbor. The first of four catamarans arrived in January 2012 and was built from Bob Whitford’s famous “WhitCat” design that you see all over Newport Harbor and up at the Sacramento State Aquatic Center. After realizing that these were too big for our use, let alone take up limited dock space, an alternative had to be researched. At the same time, it was identified that funds would only be available for a local purchase or project. Brandin had gathered the support of several sources when he and Dan discovered a clever builder, Luke Forster, in Lake Elsinore, CA, who had our answer. With the additional help from Mitchell Brothers Machine Works in Buena Park and Tradewind Inflatables of Santa Ana, we made the best of what we had, which ended up working out for the betterment of the coaching staff. The second “blue” catamaran based on this design arrived in April 2013, after a successful test run in Huntington Harbor. The bow of the blue catamaran has a replica of Beach Crew’s old “Sharky” vessel that retired in 2011. The third “yellow” catamaran, which bleeds the true “Black and Gold”, arrived in August 2013.

The final of four vessels arrived on August 30, 2014, and was named after Nancy Jezak (Grgas), wife of former BCA President, Victor Grgas. Nancy passed away earlier this year and is survived by her husband Victor, kids Steven and Jeff, and two grandkids.

May Nancy guide the crews for years to come. 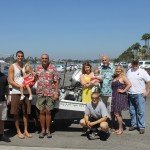 The Grgas and Jezak families join us with the arrival in Nancy's honor. 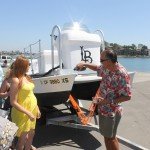 Vic has the honors. 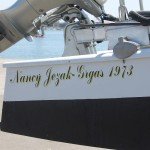 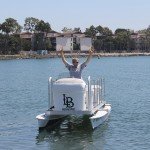 BCA's Director of Outreach is the first to hit the water. 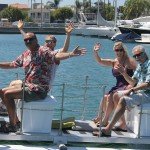 Beach Crew would like to thank the numerous alums, companies, and friends in making this project a reality:

Our efforts don’t stop here as the fleet requires continued care in the road ahead. Everyone’s continued support is greatly appreciated. Anyone remember ol’ Sharky? The Sharkmouth? The Predator? His legacy lives on! 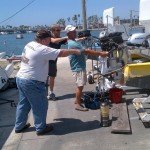 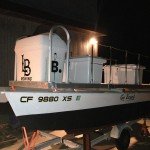 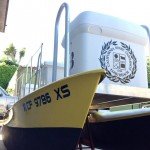 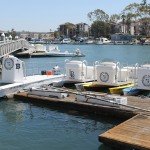 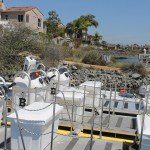 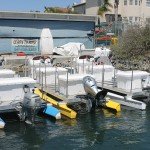 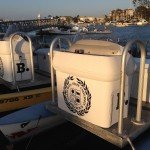 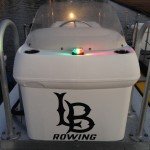 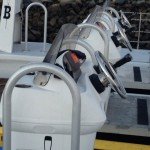