After a competitive season, the Long Beach State Rowing Team walked away from the Western Intercollegiate Rowing Association (WIRA) Championship Regatta with a set of medals from both teams: silver for the women’s novice four and bronze for the men’s lightweight four.

WIRA took place at the Sacramento State Aquatic Center in Sacramento, Calif. on April 26 and 27.

“There are some very good athletes in the novice group who very early got a feel for how much fun the sport can be with some hard work and determination,” women’s coach Ian Simpson said. “The novice group performed well all year, from being undefeated at the [Head Race 1,000-meter sprints] through a couple of good races at the San Diego Crew Classic, the great performance at the Chapman Invitational and the culminating at WIRA.”

The lightweight boat practiced together for two weeks before WIRA, according to Yotsov. Brand has only been rowing since January.

“The four of us were all determined to do well in our final race, and this drive made us practice harder to achieve our goal,” Yotsov said. “I don’t have any regrets from our race; believe it or not. I could say we could have had better technique or could have spent more time working out, but I know each person in my boat put their full effort, and as long as I know that they each did the best they could do…I am happy.”

Men’s novice coach Jonathan Flietstra said that he was confident the lightweight men would perform well if every one of them qualified to race.

“The first thing they did well was weigh 160 pounds!” he noted. “I knew that after they weighed in and met those qualifications, that they would have a pretty good chance at getting a medal.”

As for the novice four, the main focus in practice was to increase their speed through improving on their rowing technique.

“A lot of our guys, at their size and weight, are about maxing out on what they could realistically pull right now,” he said. “Trying to get physically stronger in less than a week is almost impossible. But getting technically faster is very possible.”

They finished before ASU by 1.5 seconds, followed by Oregon State University and SDSU.

“These novice men have an excellent opportunity to continue to build the program and create and be a part of a very competitive varsity team,” Flietstra said. “They also need to begin thinking about recruiting and building their team…not only for next year, but for two years down the road.”

The men’s varsity four, which included Jake Skoll, Jacob Bledsoe, Grey Mouser, Patrick Tilley and coxswain Kaitlyn Gold, came in fourth behind LMU, SCU and SDSU at the grand finals with a time of 6 minutes and 56.69 seconds. They managed to beat Seattle Pacific University (SPU) by one second, followed by L&C.

“The four did well,” Tilley said. “Looking back on it, we went as fast as we were going to go — given what we had on Sunday. It was our best race of the season in my opinion.”

On Saturday’s heat, they finished second behind WWU with a time of 8 minutes and 4.1 seconds, before Orange Coast College (OCC) by one second, UCI by two seconds, PLU and UCSB.

In the grand finals, they came in sixth place behind WWU, Humboldt State University, UCSD and OCC with a time of 8 minutes and 5.1 seconds, only about half a second after SPU.

“I think we raced hard on Saturday, and it’s hard to repeat that,” Davis said during a team meeting. “It was really competitive right from the start, and really any one mistake we made would have been a seat lost.”

Next year, first-year women’s assistant coach Tamar Schaap will be studying abroad and will no longer be available to coach the women’s team.

“I now feel really guilty for leaving after the year, since finding coaches was an issue at first,” she said. “But partly due to personal life…I saw that I wanted to go to school again, and coaching — especially novices — made me think about training for myself again.”

Overall, Simpson noted that the team raced to the best of their ability at the given time and hopes the new varsity group is large enough, and experienced enough, to start where they left off, with a good attitude and a successful year. 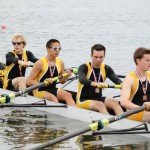 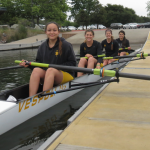 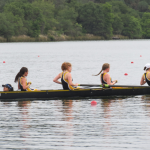 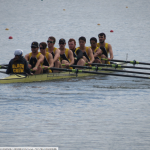 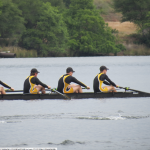