The Long Beach State Rowing Team (Beach Crew) varsity and novice women finished first in their 2,000-meter races with the same time of 8 minutes and 15.4 seconds at the Chapman Invitational in Newport, Calif. on April 13.

The women realized they were distancing themselves amongst the other crews around the first 500 meters of the race, according to Robles.

The varsity women, who comprised of Maria Guardiola, Kelsey Davis, Rikki Oden, Ariana Gastelum and coxswain Lauren Felske, finished 4.7 seconds ahead of UCSB who came in second, followed by OCC.

“We had a consistent rating, and we maintained our position in first place the whole time,” Guardiola said. “The race course was better, we had a better start, and I had more practice [rowing] starboard side…as opposed to [San Diego Crew Classic] where I only had a week of practice before racing.”

About a week before the Chapman Invitational, the varsity four’s boat was switched to be starboard-rigged, transferring Guardiola to stroke seat.

“It was [at Chapman] that they realized that they can do it; they can win races; that they are tough enough to hold off crews all the way down the course,” women’s coach Ian Simpson said. “Since Chapman, the varsity four has shown significant improvement every day in practice. I look forward to seeing what they are capable at the weekend.”

Simpson emphasized that it is important that the women put their focus on becoming even stronger competition as they prepare for the Western Intercollegiate Rowing Association (WIRA) Championship Regatta.

“Now, they must dedicate themselves, individually and collectively, to produce two final races that go far beyond anything they have done in practice, to push themselves harder than they ever thought themselves capable of,” he said.

The men’s varsity four, which consisted of Jake Skoll, Grey Mouser, Jacob Bledsoe, Ryan Woolner and coxswain Kaitlyn Gold, finished second in their heat behind UCSB with a time of 7 minutes and 16.6 seconds. They finished 37 seconds before Chapman University.

All four rowers had to race in the varsity-eight race that was held only about an hour before. The varsity eight finished third behind two UCSB boats with a time of 6 minutes and 26.5 seconds.

The next race the crew will compete in will be at the WIRA Championship Regatta in Sacramento Calif. on April 26 and 27. 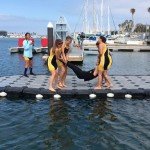 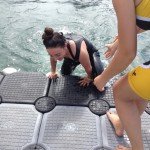 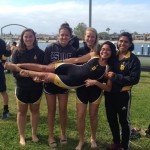 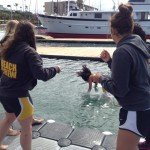 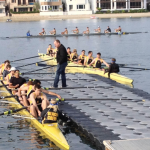 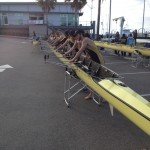 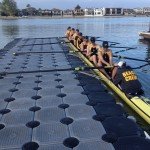