The Long Beach State Rowing Team’s (Beach Crew) varsity four and novice eight finished only five seconds behind first place in their 2,000-meter races at the Berg Cup in Newport, Calif. on March 22.

The varsity-four competition raced in the highest opposing wind that day.

“The varsity four showed a good fight all the way down the course, overlapping with the LMU varsity four, which, unlike [Long Beach], comprised rowers who had not previously raced the same morning,” women’s coach Ian Simpson said. “Additionally, the Division-One-LMU boat contained experienced scholarship athletes.”

Guardiola, Oden and Gastelum had all participated in the second varsity-eight race about an hour before. Gallardo rowed with the novice eight and returned to land with little time to recover before she had to step into the four.

“I think I could’ve done a lot better,” Gallardo said. “It’s not like an erg piece where I know where I am, and I know my split time. I just had to pin point the pain all over again. I was so tired. My feet were tingling.”

Gallardo was also disappointed because her friend, an LMU rower, had beaten her in the varsity-four race.

“I almost cried when I saw the picture of my friend holding the Berg Cup,” she said.

The next week, she printed out small copies of that image and taped them onto some of the girls’ ergs for motivation.

The novice-eight race also had close competition. Beach Crew finished 5.1 seconds after OCC and only 1.7 seconds after UCSB’s A boat with a time of 6 minutes and 59.7 seconds followed by UCSB’s B and C boats and Chapman University.

“They had a great start and led for most of the first half of the race, demonstrating their potential to match up with top crews in their division,” Simpson said. “They have to learn to get into a better, more sustainable rhythm soon after the start, and to put themselves in a better position to defend their lead and to fight off challenges from other boats. They must learn to push harder even when their legs and lungs are burning with the effort.”

Gallardo believes that the girls lost their lead because they grew tired.

“When the rating got better, we started moving up more and more,” she said. “Also, nobody was familiar with the course…[coxswain Sheila Robles] knew where to start and where to finish. She didn’t know where halfway was. I didn’t know how much I had left. If we had all known, I think we would have done a lot better.”

“I felt really scared when we pushed off from the dock,” Hove said. “But Lauren, our coxswain, has a really soothing voice, so that calmed me down.

The novice four, which included Hove, Atkins, Saliba, Brittni Finley and coxswain, Dresser, finished third behind UCSB and UCI with a time of 9 minutes and 12.4 seconds.

Simpson noted that since these girls have gotten more experience, the team can focus more on racing rather than learning how to row.

“Looking into next year, I think its good we got new people now,” he said. “For when they come back next year in the fall, and we could potentially have two varsity eights in the fall…If we have more bodies, as new people come in, they can learn at their own pace and the others can continue at their own pace. That would be a big difference. We have five varsity rowers this year and maybe 12 novices. If we had sixteen varsity rowers next year, it just changes everything.”

The next regatta the team will compete in will be at the San Diego Crew Classic in San Diego, Calif. on April 4. 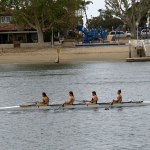 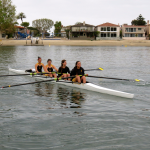 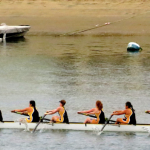 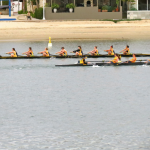 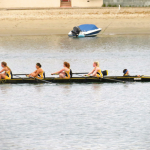 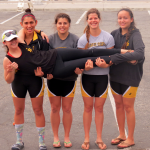