Gold is now the new coxswain for the men’s varsity four after the previous coxswain, Bryan Pulling, became ineligible as of this season.

“It’s still kind of new to me,” she said. “They want to win every time. That’s what helps. When I say something, they do it.”

Gold began rowing for the women’s team fall of 2011, and started coxing fall of 2013. She noted that rowing gave her a background on how to cox, but most of her learning came from women’s varsity coxswain Lauren Felske.

“Lauren told me, ‘You need to do what you need to do, and they will follow you,’” Gold said. “As long as I stay cool and calm, they can focus…I completely underestimated being a coxswain. And I always tell Lauren, ‘I honestly don’t know what I would’ve done without you.’”

Men’s varsity coach Rob Edwards hopes to get the men’s varsity eight boat up to their highest potential speed. They finished third in their race with a time of six minutes and 23.6 seconds behind San Diego State University and University of California Los Angeles.

“They need to push themselves a little bit more during practice,” he said. “They need to take the opportunity…We can teach technique all we want, but if they are not pushing themselves physically to become better, it’s never going to happen.”

The women’s novice eight finished their race with a time of seven minutes and 35.3 seconds, beating University of California San Diego and UCSB B and C boats.

Women’s coach Ian Simpson said he did not know what to expect from the team before the race. “Having new people coming in meant having everyone help get the new people to learn how to row, and so we weren’t able to really focus on training hard to prepare for the race,” he said.

One very new novice, Alexandra Savage, raced in the novice eight and four. She joined the team just three weeks ago. The four, which consisted of Savage, Hayley Schum, Monica Wasynczuk, Cecilia Guererro and coxswain Sheila Robles, finished with a time of eight minutes and 54.8 seconds. They won third behind UCSB and ASU.

The women’s team needs to strengthen themselves mentally, according to Simpson. “[They’ve] got to be feisty, aggressive,” he said. “[They] are much smaller than many teams [they] are going to be racing against. But [they] are not small enough to be lightweights. [They] have to row longer strokes. [They] have to make the most of every practice.”

The next race the team will compete in will be the Berg Cup, hosted by Orange Coast College in Newport Beach, Calif. on Saturday, March 23. For more information, visit beachcrew.org.

The official results are at row2k.com 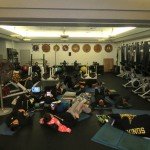 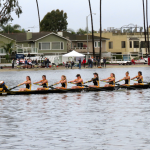 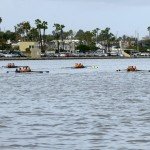 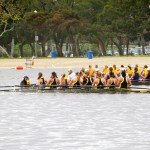 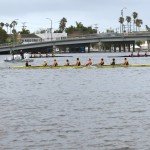 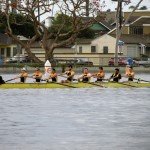