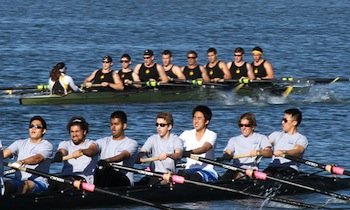 Beach Crew’s novice teams didn’t let anyone pass them on their home turf in CSULB’s Fall Collegiate Invitation Regatta. The Men’s and Women’s Novice 8+’s took on UCLA, UC Santa Barbara, Loyola Marymount, and Chapman University. In a series of eight different fairly drawn heats, The Beach took on every other shell, some with almost an entire boat length of open water between them. Coaches Jeffrey Vreeland and Ryan Spagg are gearing up their crews to end the fall racing season with a bang.

Following the racing, all athletes were served breakfast sponsored by the Beach Crew Alumni Association with the help of the Leos of the Seal Beach Lions Club. Our thanks go out to John O’Donnell, Renn Levy and Rob Glidden as our USrowing officials for the weekend. We also want to thank Bill Eldon, Bryan Bayer, and Katrin Gleie.

Official results of the regatta are posted at Row2k.