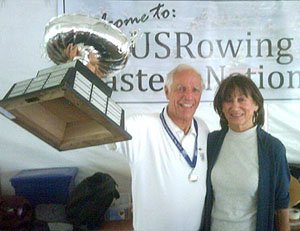 You can imagine how many rowers have progressed through Beach Crew before beginning its 53rd year on the water this month. Over the summer, numerous alumni from Long Beach State took home the fame in the sport they once started here. Earl and his wife Ann

Rowing for all ages…

Earl Johnson (age 81), took home the gold for both the Men’s Open J Single Final and the Father/Son F2x in the 2010 USRowing Masters National Championships held on the Cooper River in Camden County, New Jersey. Earl is alumni from Beach Crew’s second season in 1959. His son Daniel is also alumni of CSULB. Today, Earl is a proud member of the Long Beach Rowing Association and supporter of Beach Crew, recently supporting to Coach Daniel Harris’ winning lightweight 4+ from last season. Returning to the scene of the Kline…

Returning after an 11 year absence to the course where she won the World Championships, Sherri (Kiklas) Kline struck Gold again at Martindale Pond in the 128th Royal Canadian Henley Regatta. Dominating the field, Sherri and Rachel Storvedt won the Senior Lightweight Double. Today, the Beach Crew women’s novice crews share the experience upon the Sherri Kiklas Vespoli 8+, used practically on a daily basis by the team. The Long Beach Rowing Association brought a contingent of 28 members to the FISA course. This was the largest contingent of LBRA members to ever attend this annual international event, which is usually held in Europe. The eclectic LBRA group, all dedicated to performing their best, as well as supporting their teammates, ranged in ages from mid-30’s to 80’s. They included exuberant new rowers with less than two years of rowing behind them, former national team rowers and Olympians, many with over forty years of experience.

So who’s next to take home the fame? GO BEACH (alumni)!