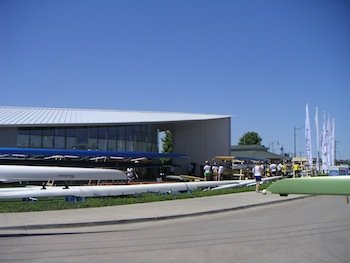 The regatta faced some tough course conditions with 35+ mile per hour head winds and choppy waterways causing two major delays throughout the weekend. The Men’s Pair (M2+) events went into semi-finals with Long Beach State making it into the petite finals with all small-boat event becoming cancelled Sunday morning. The Women’s Lightweight 4+ took on a close fight in the time trials for lane placement on Saturday between all crews finishing within 12 seconds of each other while faced with these tough water conditions. The Beach pulled off a run of 8:58.301. Their grand final on sunday placed them in fourth with a time of 9:12.67. The University of Kansas took home the gold with a winning time of 8:51.83, followed by Michigan State, 8:57.4, Georgia Tech, 9:02.38, The Beach, and trailing behind, Northwestern Crew, 9:20.2, and Ohio State at 9:31.48. It was a tough-faced event for these ladies and we are proud of their running.

The team took some time to sightsee the area including the Oklahoma City Bombing site and the Chesapeake Olympic Training Center.

– See the final results for the event
– Check out the future waterway projects of Oklahoma City’s Boathouse District for this venue.