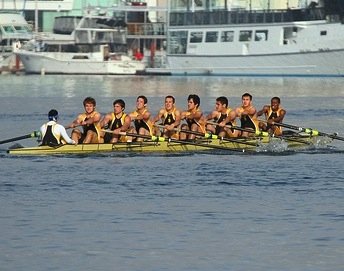 Beach Crew has been busy in April traveling up and down the western states.

The beginning of the month found the team ending their Spring Break double-day training on campus and at the Pete Archer Rowing Center. April 2 found the team traveling from Long Beach to Vancouver Lake, WA, to compete in the Northwest Collegiate Rowing Invitational (NCRC). Unfortunately, due to wind conditions, the regatta was cancelled. But the team didn’t go home without any time on the water. The host, Lewis & Clark College, moved the venue to their waters along the Willamette River in Portland, OR.

Back in sunny Southern California, the 49er Women fought out with U.SanDiego, Orange Coast, UC Santa Barbara, UC San Diego, UC Irvine, and Chapman Univ. Top places go out to the Novice 4+ for placing second to UC San Diego by less than two seconds. The 49er Men’s Novice took second to the lead in less than .8 of a second.

The team will travel to Sacramento on April 30 to compete in the annual Wetern Intercollegiate Rowing Association’s (WIRA) Regional Championships, May 1-2. This event is hosted at the famous Sacramento State Aquatic Center along the American River.